My wife likes a drink after a long day.

She has a drink problem and I don’t know what to do about it.

She doesn’t drink that much. We have a well stocked drinks cabinet that contains pretty much the same bottles that it has contained since we got married. The cherry brandy has hardly been touched. The Advocaat gets sniffed once in a blue moon. There are a few decent bottles of whisky that get to blink every now and again when they are brought out into the light and there’s a large bottle of Cointreau that my wife bought for a desert she was experimenting with. Judging by how much is left in the bottle it must have been one of her rare failed culinary experiments. In the fridge sits plenty of beer and there’s always the odd bottle of new world wine knocking around.

Oh, and there’s some green stuff. Neither of us has a clue what it is. I’m not even sure it was green when we first acquired it.

You’d have thought that would be a sufficient range from which to find something to flop down with after a long day having her nails painted, but no. What’s her tipple of choice? Kiddush wine. 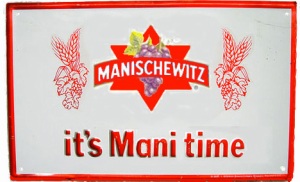 She likes the sweetness. Is there any other component to kiddush wine?

She tells me it’s cheap and it’s kosher so why am I complaining?

Saying the bracha over a Snowball isn’t quite the same is it?

Choosing what kind of Jew you don’t want to be.

A friend was thinking about converting to Judaism so I decided to offer her some advice given how important such a step is.  “After all”, I explained rather pompously, “we don’t make it difficult to convert for the sheer fun of it, we make it difficult in order to preserve the integrity of the faith.  Why would anyone choose to become a member of the most oppressed and reviled religious grouping on the planet unless they had lost their marbles?” I continued, now beginning to sound like someone who thinks they’re a bit of a Talmud khokhem when in fact they’re just a bit of an idiot, “and why would we want someone who had lost their marbles?  We have enough problems trying to keep our own from rolling around the floor.  You can’t just become any Jew,” I concluded, “you have to decide what kind of Jew you don’t want to be.”

I recommended that she try out a few local synagogues of different hues and proffered the following guidance:

Liberal or progressive synagogue services are really easy to follow.  Everything is in English and the rabbi does the work for you.  You just sit there.  If you’re going to make or receive phone calls it’s polite to go out into the lobby area.  Also, it’s more common to see a woman wearing a yarmulke and tallis than a man.

Next, Reform.  This time there is a small amount of Hebrew but this is nothing to worry about because, again, the rabbi and the choir will do most of those bits for you.  Please don’t join in the singing as it puts them off, besides, they’re here to entertain you, not the other way around.  Only contribute when you are told to do so,  responsively.  As with the liberal synagogues, the Shabbat service is quite short, often starting at 10.30 or 11am and finishing around 90 minutes later giving you the option of going shopping before or after shul.

Jumping over to the far right you’ll find the chareidi communities.  Here, the married women are easily identifiable as they all have the same hairstyle, and, in some cases, the same person’s hair.  A newspaper popular amongst these very orthodox groups is the Jewish Tribune which is mostly written in English, except the sports page at the back which is in Yiddish.  When it comes to shul, the men and women are separated.  Men go while women stay at home once they start having children, and boy do they have children.  The prayer book contains not a word of English, unless you happen to pick up one of the two Artscroll siddurs which appeared out of nowhere and which nobody with any self-respect would dare use.

Returning to mainstream orthodox synagogues, I explained to my friend that she would notice that while both men and women do attend, they are again separated, either by a curtain or by having the women sit upstairs in the gallery.  The reason for this separation is that if a man should catch sight of a woman there is a risk that his thoughts will be drawn away from the spiritual and towards insatiable lust and desire.  This is because Jewish women are expensively dressed, carefully made-up and have enormous hats that men cannot resist.

Although small, there is a growing group of shulgoers who call themselves Masorti.  Masorti is a corruption of the word “Allsorty”, and refers to the fact some of their shuls have women who wear talleisim, lead services and layen, while others have separate seating for men and women and only men may ascend the bimah.  The Masorti movement is the only one where, to my knowledge, there are members who will refer to another Masorti shul as “the one I don’t go to”.

Last time I spoke to my friend she had decided to become a Jedi because it seemed altogether more sensible.

Some weeks ago the JC printed a story about how a sweet, launched in celebration at a bar mitzvah, hit the rabbi in the face and caused him considerable discomfort.  The word on the streets of Hendon is that this was a deliberate act by a congregant unhappy with recent sermons.  I don’t believe this scurrilous rumour for a minute.  It’s beyond comprehension that someone might react in this way to a rabbi’s preaching.

What I do believe is that Jews all over the country saw this coming (even if the rabbi in question didn’t).  There was a time when there was a degree of decorum in our synagogues.  Don’t get me wrong, I love a simcha and I especially love a bar mitzvah.  Nothing brings me closer to the Lord than hearing some pre-pubescent kid I don’t know screech and yodel his way through Maf and Haf.  Still, this was a time bomb waiting to explode.

The truth is that sweet throwing is the new paint-balling.  In one shul I visited recently three school-friends of the boy were carefully installing a specially converted Gatling gun at the back of the shul when I arrived.

I also noted that nobody in the congregation was the slightest bit interested in what the poor lad was reading or how he was doing.  They were all entirely focused on him finishing, when, of course, the inevitable happened.  Rather than a gentle, celebratory shower of sweetness, the boy, and anyone else in the firing line, was assaulted by a carefully yet violently aimed barrage of boiled confection.  Fortunately the St. John’s Ambulance people were on hand to look after the several casualties.

Afterwards, and with no little embarrassment, I asked one of these volunteers what they thought of the events that had unfolded, expecting some invective about barbaric and inhumane customs that cause deep distress in the name of religion.  Instead the chap told me he thought is was great because usually they just hang around rainy school fetes and have little more to deal with than 4 year old kids with candy floss sticks stuck up their noses.  At least someone was happy.

But what upsets me most is that the bar mitzvah boy is the last person that should be subject to such treatment.  Is this the way we show appreciation for someone who has spent months learning?  Is this the way to support someone in what is quite probably the most nerve-wracking thing he’s ever done?  Is this the way to encourage young men to commit to their faith?  I think not, and what will that mean for a community already in Jewish identity freefall?

It’s clear that people have grown accustomed to sweet throwing.  The tide cannot be turned back – it’s now virtually minhag.  On the other hand we need to protect our young people.   So how about changing things just a little?  Instead of throwing sweets at the bar mitzvah I think we should throw those awful powdery biscuits with the bits of glacé cherry at whoever it is that organises kiddish.  Then maybe, just maybe, we’ll get some decent tuck after the servic